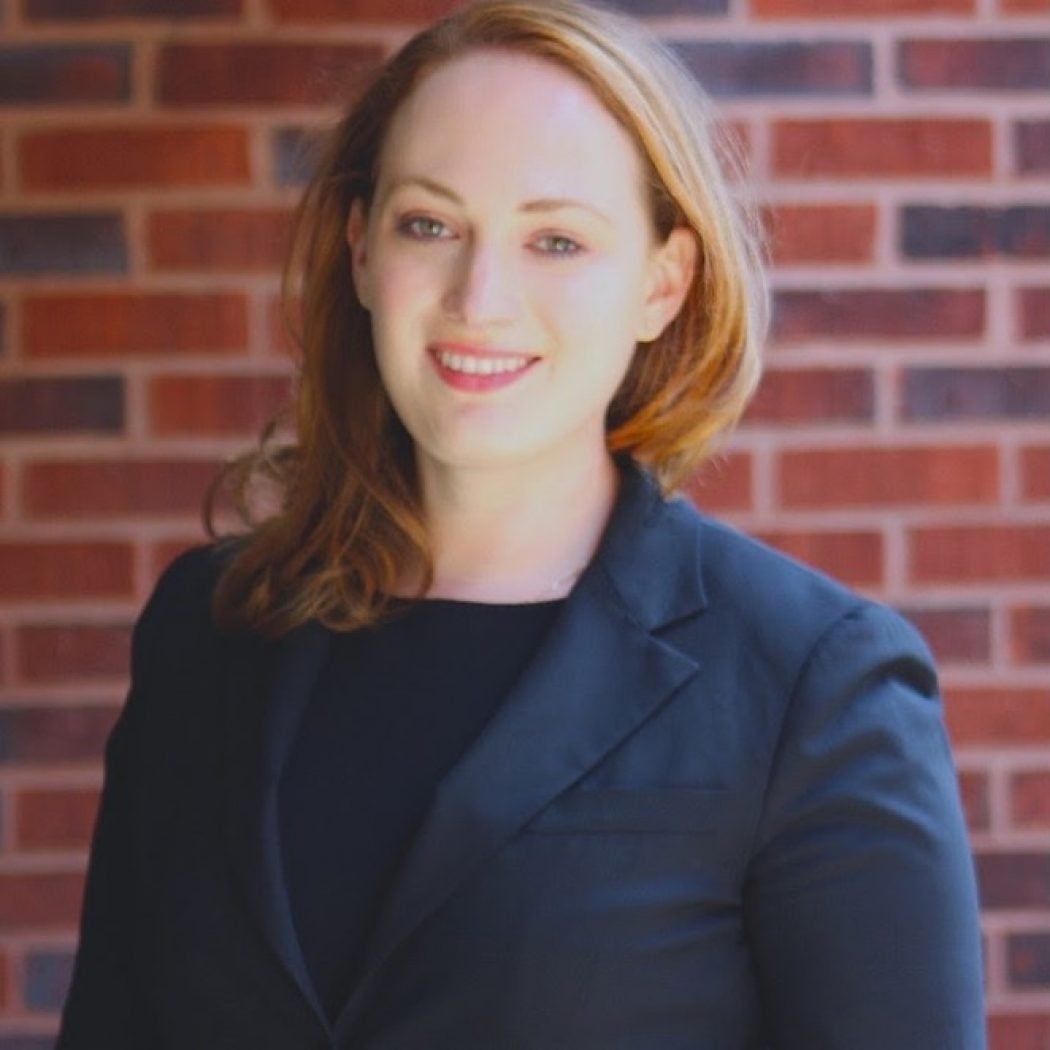 This profile was updated in June 2022 with Emma Stokien's new position. Below is the original profile, posted in April 2021.

Emma Stokien never imagined going into military service until she met Georgetown’s large community of veterans as an undergraduate. Emma’s interest in national security began when she took a class that explored game theory as an element of nuclear strategy, demonstrating the rigorous analysis that underpins U.S. national security. Through additional national security-focused courses, Emma met veterans who were now pursuing their own studies and this welcoming community inspired her own military service as an opportunity to serve her country and gain hands-on experience in the application of military force. The camaraderie demonstrated at an informal Marine Corps birthday party organized by members of the Georgetown University Student Veterans Association made the Marines feel like the inevitable choice.

After spending nearly five years as a Marine, Emma, encouraged by a former professor, chose to apply to SSP in order to learn more about the issues that she wrestled with as an intelligence officer on a more strategic level. SSP was an opportunity for her to supplement her experience in the Marine Corps by learning about historical and theoretical contexts, as well as the many actors involved in the national security policy-making processes.

While at SSP, Emma concentrated in international security and took a wide variety of courses, ranging from classes on logistics to stability operations. Looking back on her coursework, however, she wishes she had taken more classes focusing on technology as well. With artificial intelligence, space, and cyber policies becoming increasingly relevant in the national security arena, she believes she could have benefited from establishing foundational knowledge in these areas.

Emma worked at the U.S. Department of Commerce’s Bureau of Industry and Security in her second year of SSP to gain a foothold in federal service and broaden her perspective on where in the U.S. government national security policy is made beyond the Departments of Defense and State. A few weeks before graduating, Emma traveled to Jerusalem for a bilateral meeting on counter-proliferation as part of a delegation of representatives from various U.S. federal agencies. The delegation of seven included five SFS students—three of them from SSP—which only strengthened her beliefs about the important contributions that Georgetown students make in the field of national security.

Since graduation, Emma has been working as a Presidential Management Fellow, recently assigned to Congress after spending over a year at the Pentagon. In her opinion, there is nothing more important in her work—and in the realm of policy in general—than the ability to write and communicate, a skillset that SSP helped her develop. “Nothing gets done without articulation and getting people onboard,” she says. Her classes at SSP not only encouraged her to wrestle with big ideas, but also articulate them in coherent, concise arguments. The feedback Emma got from engaging with her peers and from her professors—most of whom were practitioners with established careers in their respective fields—prepared her to be effective in expressing her arguments in a convincing manner.

Emma continues to be actively involved in mentoring other veterans through their transitions to school or civilian careers today. She feels that she owes so much to the veteran community and believes that she wouldn’t have the career that she has now without her military experience and her interaction with other veterans that set her on this path. Emma currently volunteers with Veterati, a mentorship program for veterans, where she advises fellow veterans seeking to transition from military to civilian careers. She sees this work as an opportunity to give back to the veteran community and pass on the lessons that she acquired through her own experiences. And Georgetown, in her opinion, does a lot to help veterans and military-affiliated students as well. “There’s a lot of red tape,” Emma says about working with the VA and pivoting back to student life after military service. “And Georgetown makes this process as smooth as possible to make sure that these student veterans are able to focus on their studies.”

To current SSP students, especially those serving in the military, Emma advises exploring different internships and fellowships to gauge the type of work environment they like. There isn’t much choice about the leadership style and environment in the military, but in the civilian sector, there are more options and freedom. Exploring different opportunities could help students find a work style that they find most comfortable and fulfilling.