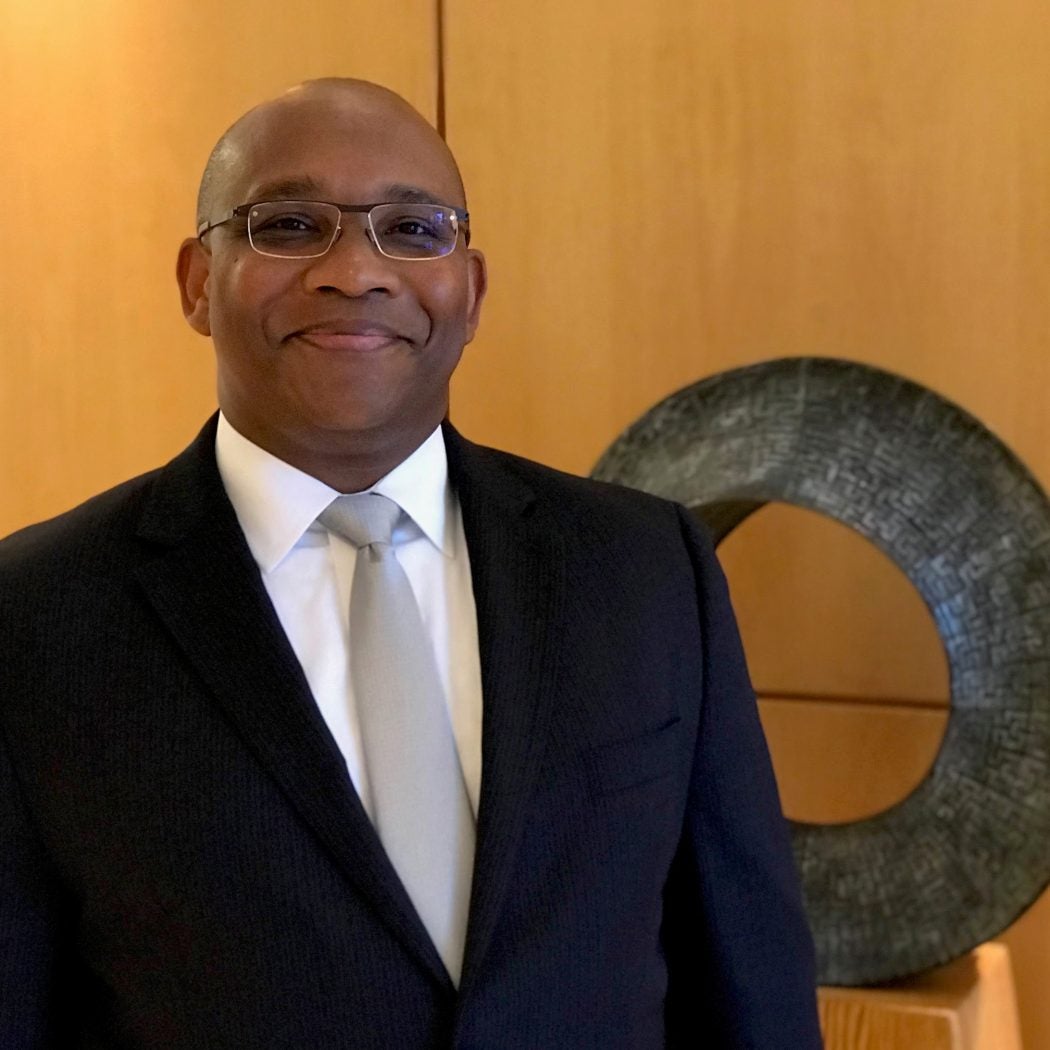 Born in Las Vegas, Tony Johnson had two career aspirations: work in the music industry, or work in national security. An avid fan of WWII and military-themed movies, James Bond, G.I. Joe and European court intrigue throughout history, he eventually decided to choose the latter path. “Despite hard-won progress in civil rights, pathways for professional and social mobility for African Americans were still complicated and somewhat limited for Black folks back then,” he says. “I wanted to make something of myself and I chose the military.” He enrolled in Norwich University, the oldest non-federal military academy in the country, as part of the Navy ROTC program and studied international relations.

Upon graduating from Norwich, he was commissioned in the Navy and was stationed mainly in Europe, to the staff of the Commander of U.S. Naval Forces in Europe. He served on direct support intelligence and cryptology missions during the NATO intervention in Bosnia and Herzegovina. His military career ended abruptly when he became a casualty of the Don’t Ask, Don’t Tell policy and was forced into an honorable resignation of his commission. However, he retained his desire to serve and pivoted to high-level consulting work in the private sector, working on organization design and strategy. This started Tony’s long road back to working in the national security field.

Over the next two decades, Tony found roles in a variety of private- and public-sector organizations, doing work on policy for the Defense Science Board, the Defense Advanced Research Projects Agency (DARPA) and the Office of the Secretary of Defense. In the latter role, he worked specifically on special operations and irregular warfare. “I love the SOF [special operations forces] community,” Tony reminisces. “I love the mission, the people, and the organizational ethos. It was full of smart folks doing hard jobs.”

One long-term professional relationship has been with the Institute for Defense Analyses (IDA), where he began as a Research Associate in 2008. He has returned to the organization several times since then, including while he pursued his master’s degree at SSP with funding from the organization. As a fan of The Hunt for Red October, Tony was excited to attend the same university where Jack Ryan studied: “Imagine how I felt walking across the quad!” He had to consult with his director at IDA on his course choices to see how they were relevant to his work—and he sometimes got nudges to take specific classes—but was still able to take classes that he was interested in. He particularly enjoyed his classes with former Secretary of State Madeleine Albright, Dr. Elizabeth Stanley and his thesis advisor Gregg Jones.

While pursuing his degree, he was also selected to work as a DoD liaison to the State Department. He worked with several African nations on defense sector governance, border security and cybersecurity to strengthen regional cohesion, individual security policies and operation matters. “The goal was to help our partners handle their own security issues and provide greater interoperability with the United States. We engaged with our partners first to understand their goals and collaborated in ways that aligned with U.S. foreign policy and defense objectives.”

When he found time between schoolwork and his job, Tony enjoyed “nerding out” about foreign policy and national security with his group of friends, hanging out with them at The Tombs after class. One of his favorite SSP memories, however, wasn’t about his classmates at all. Instead, he recalls his graduation, seeing how proud both his mother and his husband were.

Tony still contributes to the SSP community as an adjunct professor for a course on strategic red teaming, in which he teaches students the value of red teaming as a strategic decision-support tool and the strengths and limitations of red teaming techniques. He says that the SSP classes that he took as a student definitely influence his own teaching style, as he draws inspiration from professors like Dr. Stanley and Dr. Elizabeth Grimm. “It’s a sobering prospect to teach a course that isn’t offered anywhere else except the military,” he says. “I feel a deep responsibility to teach it properly. It is a privilege and an incredible experience to teach and learn from my students. Sometimes it is tough to teach after an exhausting day at work, but once I start engaging with the students, the energy and excitement come back.”

A passionate advocate of DEI initiatives, Tony believes that promoting diversity in the national security environment is key to increasing the pool of exceptional people working in the field. To make sure people have the tools to succeed, he advocates for structural remedies, changing the national security apparatus to make it more fair and transparent. He recognizes the challenges to changing the status quo, especially in the security world, and that there is still a lot more work to be done: “I would like to see more BIPOC or LGBTQ+ in national security, but members of these communities to which I belong are typically funneled towards jobs that deal with social issues and human resources, as opposed to hard security issues about which we have useful perspectives to offer U.S. national security leaders. If you’re in a position to hire people to your team or organization, you have to decide to be inclusive and be intentional about how you make your organization and working environment inclusive. But know this: there is no silver bullet to do the work of deep and enduring change. However, if you look around and see that the professional space you work in looks nothing like the country we live in, it is your mission to be the change you want to see in the world.”